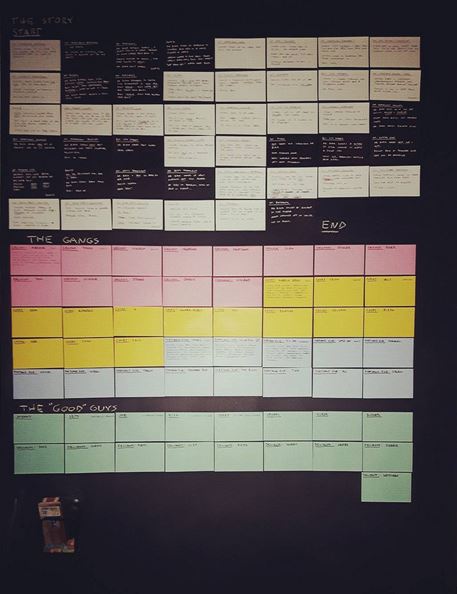 I am in the middle of working on the final sound mix for How to Get Away with it. It’s really fun to see this world I constructed come to life with [mixed] sound and dialogue.

Pain in the ass too.

While other filmmakers might be mixing audio separately for scene 1, 2, 3, etc., I’ve been lucky enough to pigeonhole myself into making a 100 minute feature that takes place in the same location — almost in real-time. Yay. This means that the sound at 00:00:00:01 has to be more-or-less the same as the sound at 01:41:19:09.

I’ve never worked on a project of this magnitude before, so the fact that I haven’t crumbled to bits just yet is promising. I’m so close to finishing this beast (2017 is MY year). And this was supposed to be the easy film. Hah!

In addition to that, 2017, for me, will be known as the year of four screenplays (okay, maybe five — but definitely four). For the past six months I’ve been outlining four new screenplays based on original ideas of mine which I’ve been writing extensive notes on for some years: One in particular has been gestating in my notebooks since 2005. Two of the four ideas will be rewrites — I’ll be updating older screenplays (one drafted in 2010, the other in 2013) to face contemporary issues and to bring the stories in line with my more-evolved style of writing.

Thematically, the screenplays are starkly different, with topics from across the spectrum of human endurance:

Of course I won’t elaborate on the plots at this time, until I have something to show. I can’t wait to show you!